As a new Rustacean, I had heard about how awesome the Rust borrow system is, but I had not quite understood why. One thing I learned about myself recently is that if I wanted to be an efficient learner, it is important for me to understand the ‘why’ part.

So, that brings me to the question: why is Rust’s borrow system considered great? Why do seasoned Rustaceans strongly prefer borrowing over copying or cloning variables?

In order to understand the answers to those questions, I had to understand what’s happening when a variable is moved, cloned, or copied. My background is genetics, not computer science, so to understand move, copy, and clone, I had to learn the basic anatomy of computer memory: the stack and the heap.

This blog post is a review/note to myself about these concepts in the context of Rust: what happens in the stack and the heap when a variable is moved, cloned or copied.

The Stack and The Heap

Computer memory is like the human memory in the brain; it stores information. The heap and the stack are separate regions in the memory with different functions like how different parts of the human brain have different responsibilities.

Any piece of data that will be stored in the stack must know its size at compile time. I can store an array in the stack if I know that it has a static length, and will not grow or shrink. What if I didn’t know how long my data will be at runtime? If I were to store it in the stack and tried to increase its length, it will violate the stack rules because I can’t insert new data in the middle of the stack. That is why we created the heap.

The heap is like a large space, where any data can claim a free spot as long as it fits. For example, I can have a vector on the stack that has an address pointing to the heap, where its elements reside. That way, I can grow or shrink the number of elements in the vector as much as I want without violating the stack rules.

There is one cost to the heap’s flexibility: extra clean up. With the stack, data is cleaned up as it goes out of scope. With the heap, we need to clean it up ourselves. For example, when a vector is no longer in use, it must take care to also destroy its elements residing in the heap.

So what does the stack and the heap look like when I create a variable binding in Rust? Say there is a coloring book named free_coloring_book where each page is dedicated to a planet of our solar system! And it’s up for grabs!

I used a vec to represent the coloring book. free_coloring_book is a vector of &str string literals. The data in the vector (references to our planet strings, in our example) lives in the heap, and the vector can grow if needs be. What does this look like in the memory?

The stack contains metadata about the data on the heap. free_coloring_book is a vector that owns 8 elements, and therefore its length is 8. capacity shows how much room is reserved for this vector in case it grows. In this case, it’s about twice as big as length, hence 16. pointer contains the address in the heap, where the actual elements live. Each element is a pair of a pointer to a str and its length, known as a slice in Rust’s parlance. For example, "mercury" has a length of 7.

Now, let’s say a friend claims ownership to this free_coloring_book! Our friend will make it mutable, so that they can add pages if they want to.

free_coloring_book is no longer accessible, and the Rust’s borrow checker will tell us if we try to access it.

Link to code and the compiler’s message:

What would happen in the memory?

capacity remains the same, because the vector still has enough room in case it grows. length, however, is now changed to 9. This allows the pointer to know that the length of the vector is 9, starting at location 0xf00.

So far, our friend claimed ownership of the free_coloring_book, and they modified it by adding "pluto" to the book. What if you didn’t like this change? You decide to make a clone of our friends coloring book so that you can make your own version: 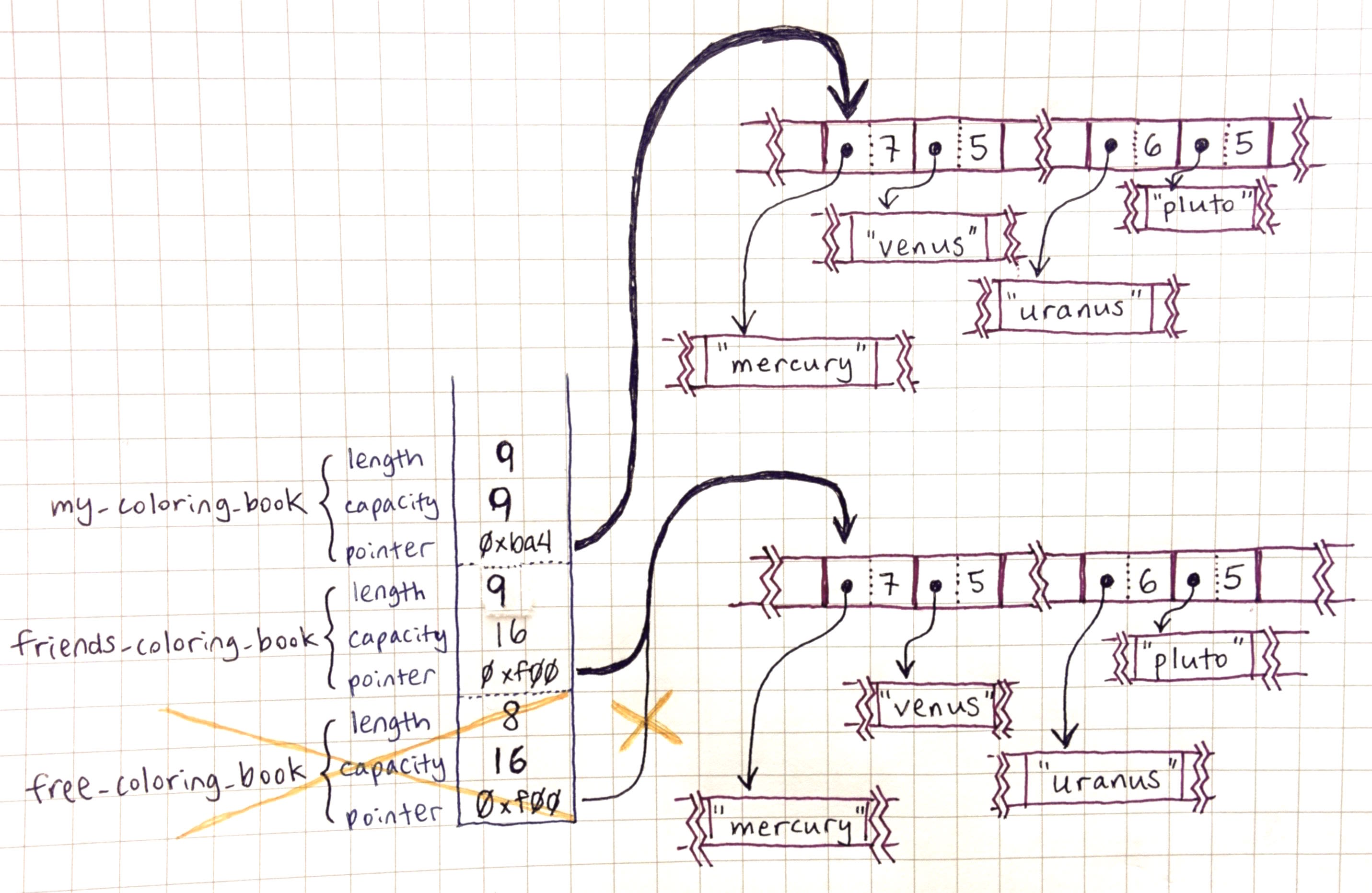 When the data is cloned, it creates an exactly identical copy of the data that is independent of the original data0. You argue that Pluto is a dwarf planet, and should not be on a coloring book of planets. So you remove the last element ("pluto") from my_coloring_book. What happens?

my_coloring_book and friends_coloring_book are different! They are independent of each other, and that’s why they are both accessible by println!. How would our coloring books look like in the memory? 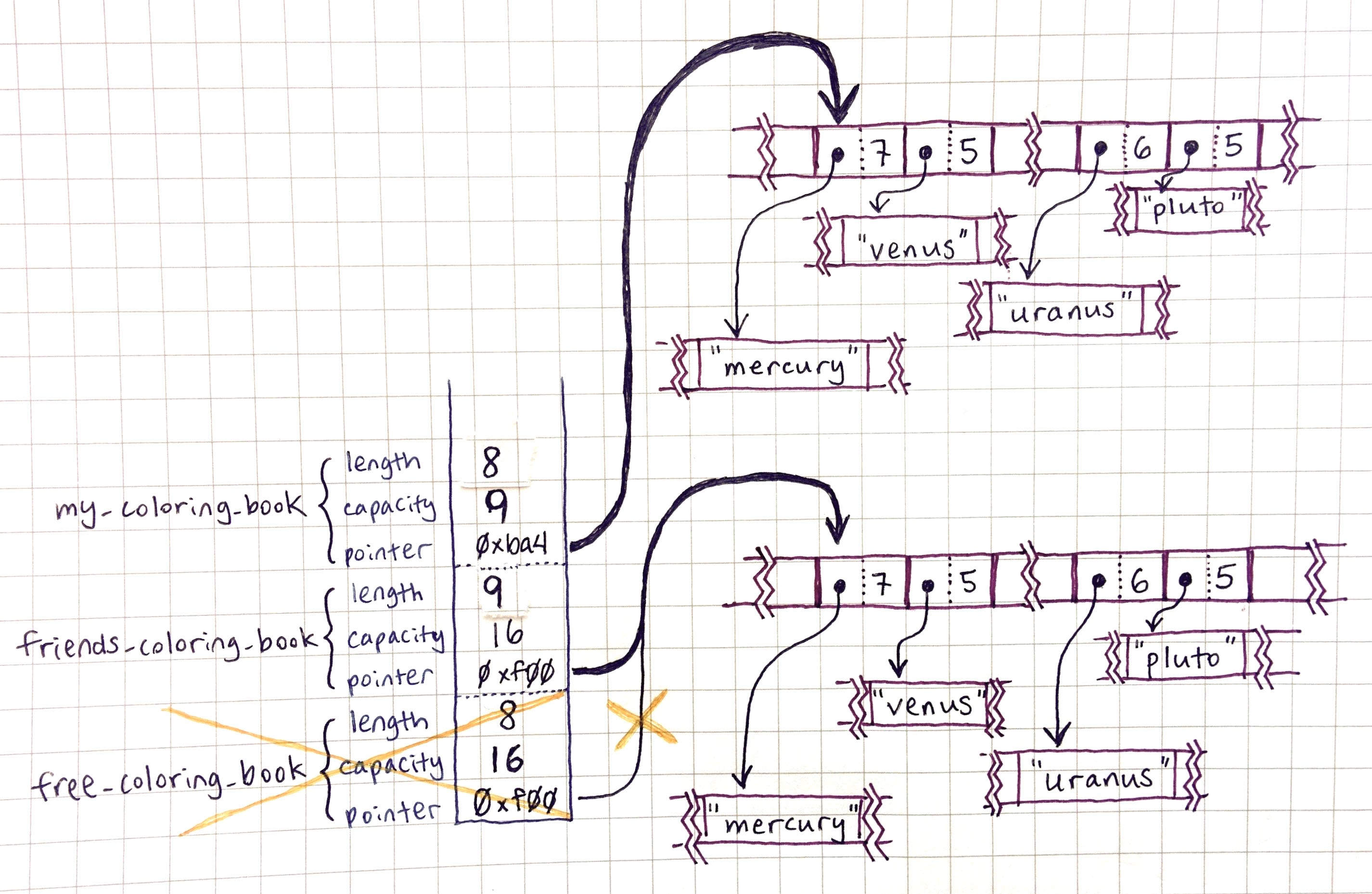 Now, the data in the heap still includes "pluto", but the length pointer on the stack has decreased by one. This way, the computer can be lazy about actually truncating data, which would be computationally costly. Clever!

Things work slightly different with types that don’t require storing descendent data in the heap, such as a number or a character. These special types don’t own other elements on the heap like a vector does. These types implement the Copy trait, which means when the data is duplicated, it is copied bit-by-bit at the surface level. If this were to happen with a vector, the copied object would result in a duplicate pointer to the heap, and it would not be clear which copy is responsible for destroying the heap elements. But, a surface level copy is sufficient for Copy types because their data is simple and flat.

Let’s see what this means. In my previous blog post, I wrote:

The reason the compiler was able to print both x and y is that x and y are different values on the stack. Unlike with vectors in which case the value moved, when the compiler sees let mut y = x;, it creates y as a separate copy of x because x is a Copy type.

What does this look like in the stack? Let’s visualize it: 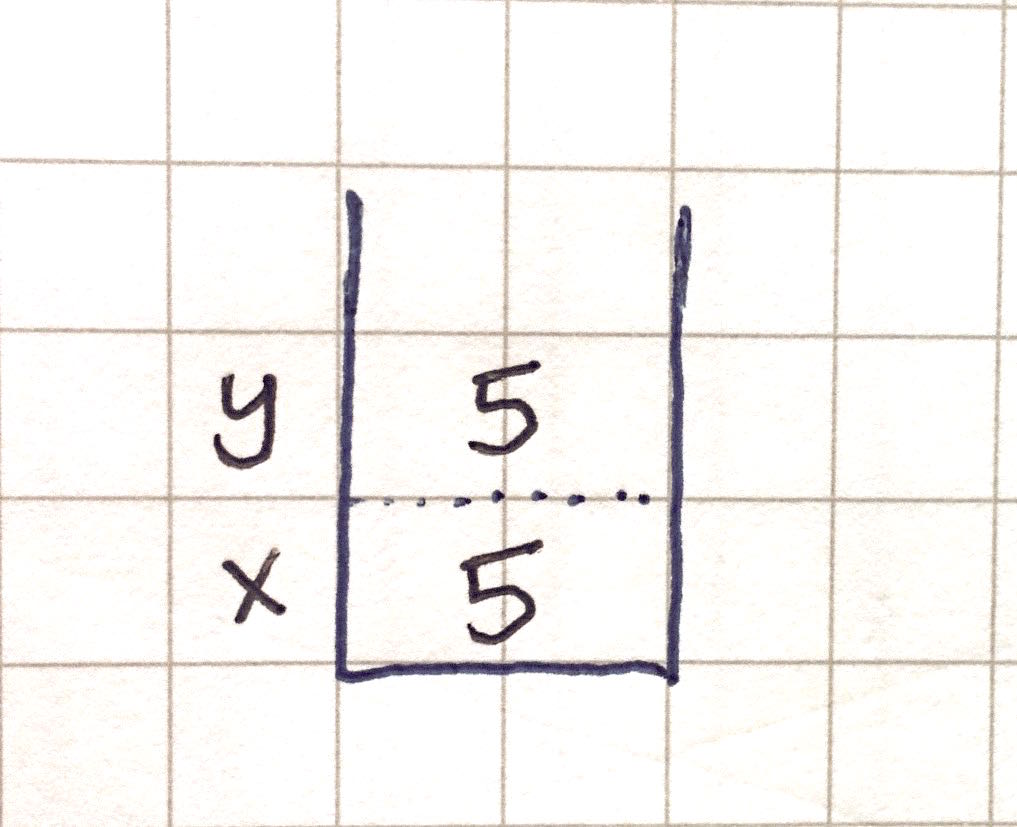 A number 5 doesn’t own other data types, so x and y are able to be stored only in the stack. When y increments by 1: 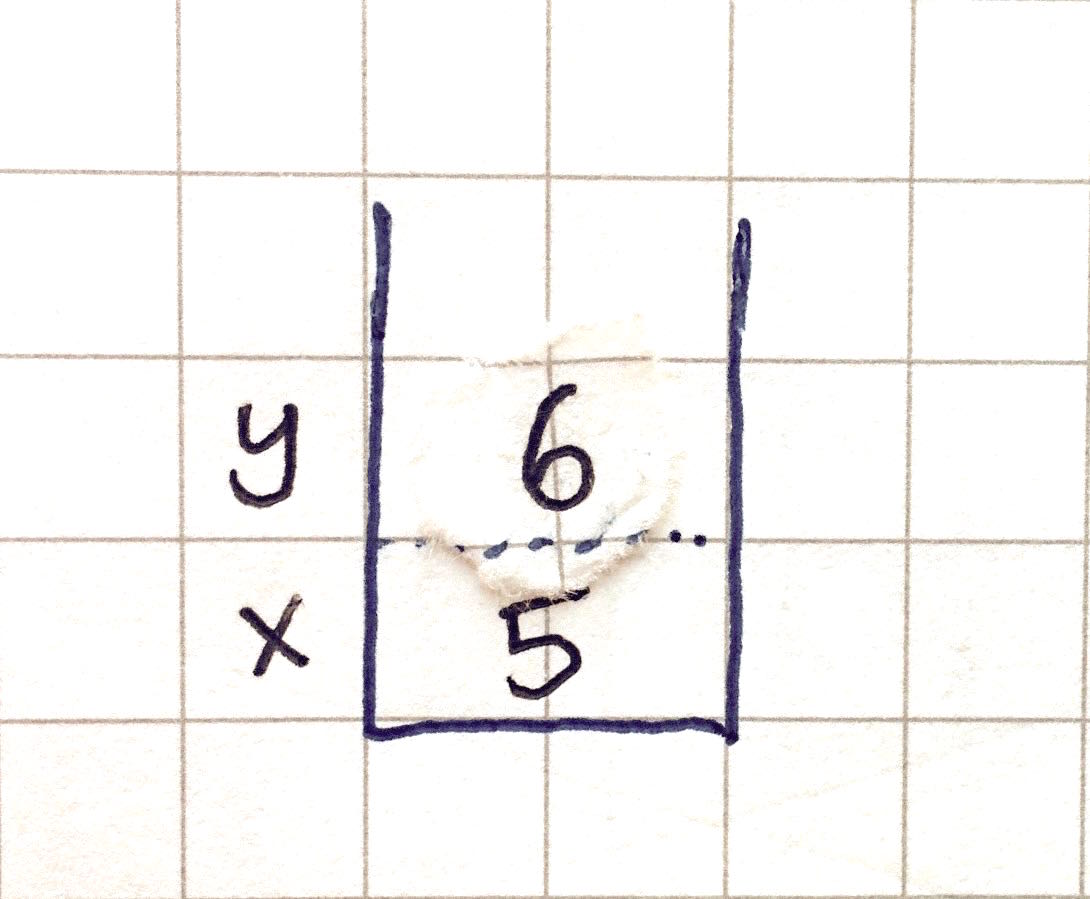 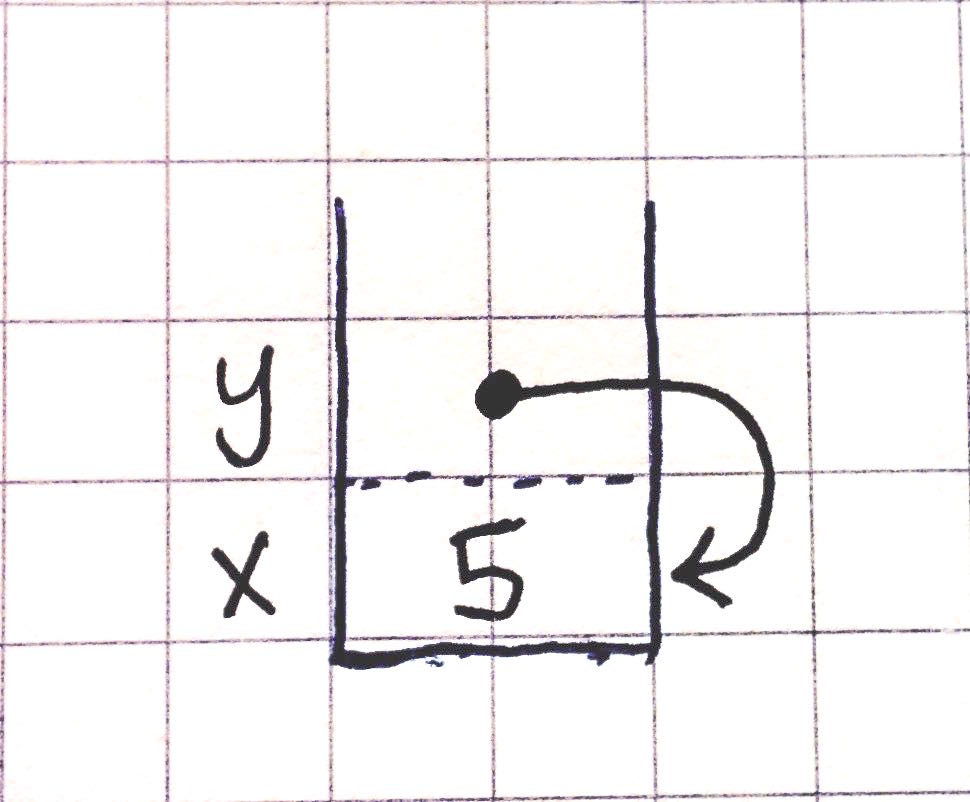 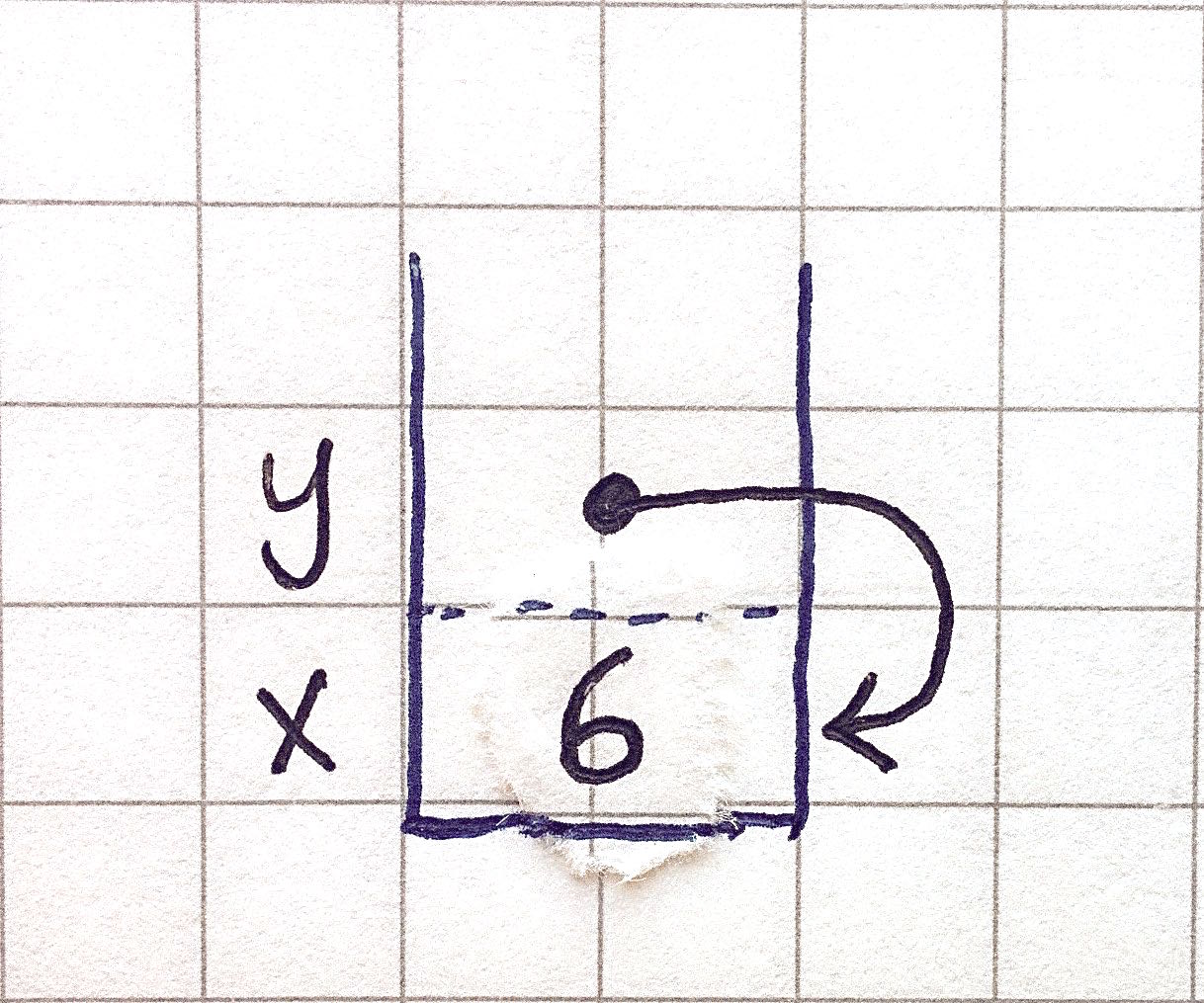 Let’s go back to the question I started with: why do seasoned Rustaceans strongly prefer borrowing over cloning or copying variables? It’s because by borrowing instead of cloning or copying, you can increase performance and potentially save huge amounts of memory!

Also, if you follow data ownership all the way back to the the owning variable, when that variable goes out of scope, the whole tree of owned data is cleaned up. This removes the need for garbage collection, which can be a computationally expensive process. This makes Rust super fast, and is another reason Rust’s borrow system is awesome.

I’ve been really enjoying learning Rust, because it has encouraged me to think about what’s happening inside the computer when I type something. By copying and cloning, is my program taking up more than necessary space in the memory? Can I make a reference instead? How is memory managed differently in other languages, like Python?

So much to learn!

0 CUViper on Rust subreddit kindly pointed out an error in my diagram. Planets are &'static str, and when they are cloned, pointer to the &str is cloned. The actual &'static str data are not cloned. If the planets were String (which is internally a vector of char) then the actual data will be cloned as well. My diagram makes it look like the string data are cloned as well, but that is not what actually would happen. I didn't know about this! Thank you u/CUViper!