Here, I implemented two different set algorithms in Python, sorted list and unsorted list. I also compared their performances for inserting and searching a value in a set. The link to my code on GitHub is here. This is the first part of 2-part series. In the next blog entry, I will write about balanced and unbalanced trees, and their performances.

The two algorithms I compared are sorted list and unsorted list. These are the steps I took for my project:

When a SortedListSet is initialized, it creates an empty list:

insert inserts the value at the correct index that binary_search returned, with Python's built-in function, insert. Contains check returns True or False depending on whether the value at the index matches the queuried number:

Insertion with sorted list algorithm has big-O of O(log2n)+O(n), which rounds to O(n). This would be when the inserting needs to occur at the first of the list, and all the items in the list are scooted to the right. The big-O of containment check is O(log2(n)).

The code for unsorted list is simple. When the UnsortedListSet is initialized, it creates an empty list:

For insert and contains, the algorithm checks one number at a time from index of zero to the end of the list:

The big-O of insert and contains for UnsortedListSet are both O(n).

I collected 100 data points of each set implementation. I used R and ggplot2 for visualizing the data. The plot of the data on a log2 x-scale and y-scale looks like below: 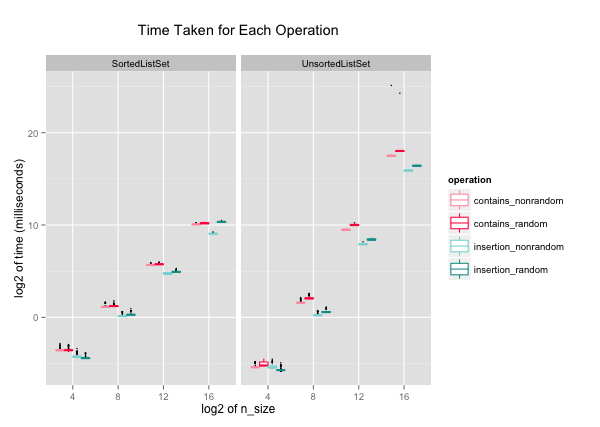 While it appears that I collected each operation data at a different n-sizes, each group of four boxes actually belongs to one n-size. ggplot2 automatically spreads the box plots so that it's easier to see the individual boxes. I used box plot because it accentuates the subtle differences between operations with random and non-random ordered numbers, rather than overlapping them like a point plot would. Let's dive into the data a little more, and look at insertion and containment check separately.

In the above plot in the UnsortedListSet plot, you can see that there are two extreme outliers that took about 27 times longer for completing the contains operation. It is odd that only two points are much slower than the other data points. I think it could have been either the order of the queries tested the worst case performance, or something interrupted the operations somehow. When sorted in decreasing order, you can see that these outliers are quite large compared to the third largest value.

Either way, I decided to exclude the two outliers so that plots look cleaner. I wouldn't recommend completely excluding outliers usually, but in this case, there are only 2 points so I removed them from the data. 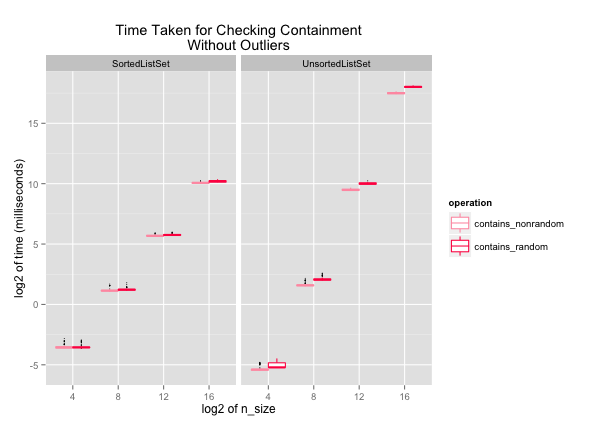 The difference between checking containment of numbers in non-random and random orders into a SortedListSet almost does not exist. This is probably because every time a new number is added to the sorted list, the algorithm does binary search to find the correct index for the number. For a SortedListSet, whether the input numbers are in random or non-random order does not make a difference in the resulting list. 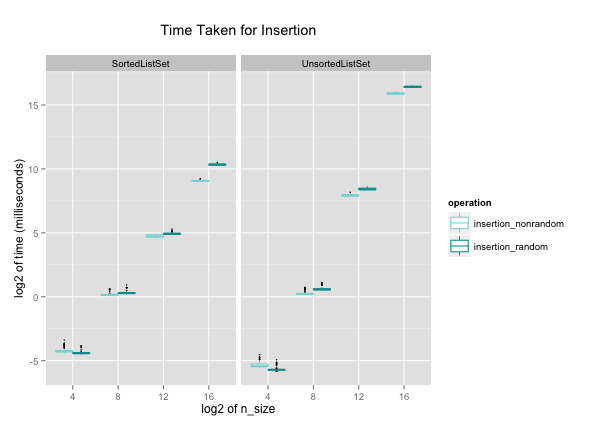 Like in contains, the time it takes to insert numbers increases at a slower rate in SortedListSet. Again, SortedListSet actually takes longer insertion time for n < 28, and starts to outperform UnsortedListSet for n > 28.

One thing I cannot explain about insertion is how inserting randomly ordered numbers take shorter time than ordered numbers at n = 24. It very well could be noise in data, or an interesting trend.

I wanted to compare the real world performace to theoretical big-O in the plots, but I had difficult time representing the big-O. For example, I understand that insertion for UnsortedListSet is O(n) but that doesn't mean it should be plotted as y = x. What would be the coefficient? What about the intercept?

I'm also looking forward to implementing and visualizing TreeSets. I wrote a script for a UnbalancedTreeSet, but for n > 28, it would reach the recursion limit and crash. Currently, the algorithm is implemented recursively, and I'm thinking about how to do it iteratively.